Finavia’s latest passenger statistics: The recovery of air travel in Finland lags behind the rest of Europe

Press release
Article published
8.9.2020 at 10:55
Helsinki Airport had 270,000 passengers in August, down 87 per cent compared to the previous year. The decline in passenger volumes was much smaller elsewhere in Europe.

“Having started to increase in July, passenger volumes turned towards a substantial decline in mid-August due to new strict travel restrictions. We estimate that the situation in the autumn will be bleaker than in August. Flights that are important to the Finnish economy – including export promotion, other business travel and international tourism – are at a standstill. There are hardly any connections available,” says Finavia’s CEO Kimmo Mäki.

The passenger volume of Helsinki Airport declined by 87 per cent year-on-year in August. Transfer travel, which has previously supported growth, has stopped almost entirely (-93%). Cargo volumes at Helsinki Airport also fell in August, by 54 per cent.

Mäki is concerned that, should the coronavirus pandemic be prolonged, Finland is at risk of losing the strong position Helsinki Airport has built as a transfer airport.

“That is something we cannot afford. When passenger volumes are this low, Finland loses revenue and jobs. Air travel has significant cascade effects on other sectors of the economy, including tourism, services and construction. 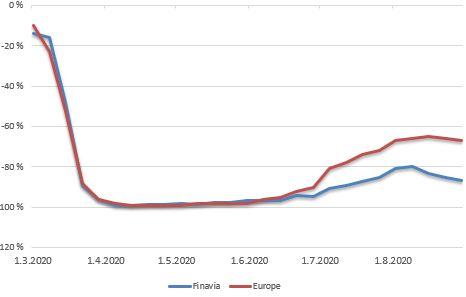 The recovery of air traffic in Finland lags behind the rest of Europe due to the strict travel restrictions. Passenger volumes declined by 65 per cent on average in Europe in August.

“Travel with fewer restrictions than at present could be possible during the coronavirus pandemic, and it could be allowed – subject to certain limitations – while taking the risks into account and operating responsibly,” Mäki says.

Finavia’s air traffic statistics are published on the Finavia website every month.

The picture of the development of air traffic is available here.