The northern part of Finland, Lapland, is the magical arctic region full of contrasts.

Every season in Finnish Lapland is uniquely different from each other. Summer in Lapland is a season of white nights and peaceful arctic nature. Summer’s glow is followed by the majestic season of fall when Lapland gets its truly iconic ‘ruska’ colors. This is the best season to go for a hike in one of Lapland’s many national parks. In the wintertime, Lapland is as close as reality gets to those who dream of a winter wonderland. Spring brings along light that follows the long season of ‘kaamos’ (arctic night in Finnish). During the spring time, the snow covered hills and fells offer exciting experiences for all winter outdoors enthusiasts from skiiers to snowshoe walkers.

Finnish Lapland is all this and more.

In 2019, there were 1.8M overnight visitors in Lapland, which is 25% share of all overnights in Finland.

North is near with Lapland Airports

Santa’s Official Home Airport, located directly on the Polar Circle. The airport served 661 124 passengers in 2019 making it the third busiest airport in Finland. Rovaniemi is the capital of Lapland and the centre of Barents region located in the Arctic Circle. It’s a city in the middle of nature with a wide variety of nature attractions in city surrounding. Rovaniemi Airport was expanded in 2019 and today, it offers various services. The recently renovated runway is 3,000 metres long.

Kittilä Airport is one of the main airports in Northern Finland. It carried 363 161 passengers in 2019 being the 5th busiest airport in Finland. During 2018-2020 Finavia invested in Kittilä Airport with several million euro's development program improving the terminal building and apron taxiways. The airport terminal opens two hours before the first departure and closes after the last departure of the day.

Ivalo Airport is located 11 kilometres southwest from Ivalo, the municipal centre of Inari, and 25 kilometres north of Saariselkä. It is the northernmost airport in Finland.

Kuusamo Airport serves one of Finland’s major holiday destinations Kuusamo, attracting almost a million tourists annually. Many of these arrive in winter to enjoy the excellent skiing available at the nearby ski resorts, especially Ruka Ski Resort, one of the largest in Finland.

Kemi-Tornio Airport is situated on the coast of the Bay of Bothnia, serving business travelers and tourists heading to Southern Lapland. Kemi in particular has been gaining an international reputation for tourism, in part due to the magnificent Snow Castle that is built there every winter since 1996. Less than 30 minutes north, nestled on the Swedish border, Tornio uniquely blends the two cultures in an exciting mixture of art, handicrafts and history. 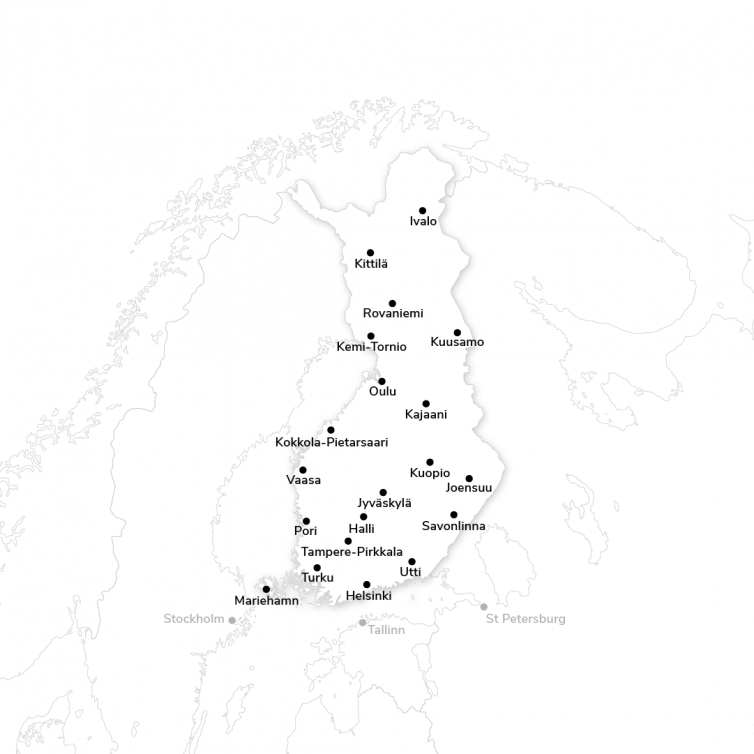