Article published
21.5.2018 at 14:36
How to develop and expand the operations of the airlines that serve Finavia’s airports? What new airlines and routes should we aim to attract to Finland – and how?

Route developers maintain good relationships with the airlines that already serve Finavia’s airports and look for ways to develop the existing cooperation with them. Collecting and distributing information between the airline and the airport is an important aspect of the job.

At the same time, route developers take a long-term view of the future and search for new ideas and cooperation partners.

Working with experts employed by Airlines

“When people think of sales as a job, they might think of aggressive tactics like getting your foot in the door and unloading hard sales arguments on the target. That approach does not work with the people we sell to. They are experts employed by airlines who value data, facts and passenger volume figures,” says Petri Vuori, Vice President, Sales and Route Development at Finavia.

“A route developer’s job is governed by the same principles as all challenging sales jobs are. You have to look into things, listen to the customers and understand their needs in order to be able to offer targeted ideas and solutions,” Vuori explains.

Vuori has been with Finavia for slightly more than a year, having previously worked at Finnair as Vice President of Network Planning. His sales and route development team at Finavia also includes Key Account and Business Development Manager Mikko Komi and Route Development Manager Aimo Rantanen. 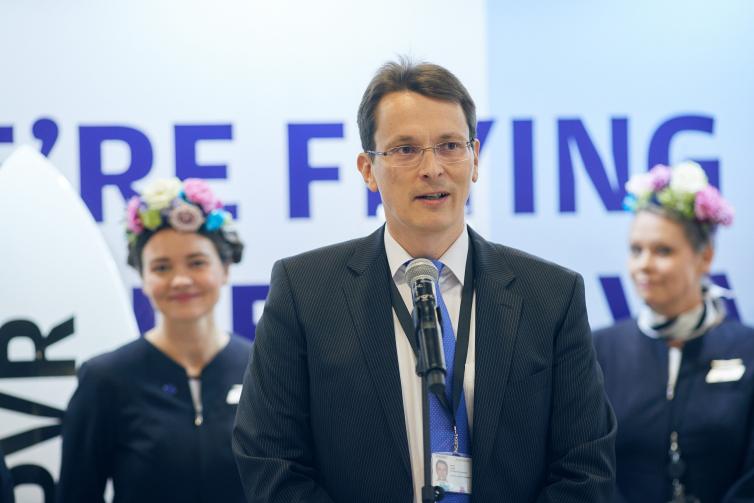 Geographically, Vuori and his team have set their sights on Europe, Asia, the Middle East and North America. The period of time they are currently focused on is 2019–2021.

“Much of our work follows the planning cycle of airlines, but going from an idea to implementation usually takes 1–3 years. As in project sales, this period typically includes several meetings and refining the ideas,” Vuori adds.

Routes conferences, organised a few times a year, are important events on route developers’ calendars. They are trade fairs where the representatives of airlines and airports meet. The Finavia team will set up about 60 meetings with airlines at the three-day Routes World conference to be held next September.

“The majority of these meetings will be with existing partners, with a focus on discussing potential increases to the frequency of their service, the launch of new destinations or the introduction of larger aircraft on their existing routes to Finland. It also gives us the opportunity to find out about each airline’s plans regarding the development of their network and fleet,” Vuori says.

Finland starts on the back foot

Vuori is full of praise for the cooperation between Finavia’s sales and marketing function, the operational activities of Helsinki Airport and the people in charge of the network airports. Effective cooperation is essential, as Finland’s small size means the country and its airports are often at a disadvantage in international competition.

At Helsinki Airport, additional challenges are posed by the impact of the airport’s ongoing expansion work as well as the peaks in traffic during the morning and afternoon.

“Flight times place certain restrictions on the timing of long haul flights. We do what we can to get airlines to operate between the peak times and we have tried to develop concrete solutions for this as part of our strategic development,” Vuori concludes.

In his free time, Vuori coaches youth ice hockey and plays in recreational leagues. He spends every available weekend from August to May at ice rinks.