Article published
16.5.2018 at 13:25
The air traffic area at Tampere-Pirkkala is gradually renewed and expanded. The implementation method has been chosen to minimise down-time at the airport. The gradual nature of the project requires flexibility of the airport personnel.

The race of construction machinery and trucks onto Tampere-Pirkkala Airport taxiway and apron started in early March and will end on August 12. During a period of a good five months, the modernisation and expansion of the air traffic areas will gradually take place.

“The gradual implementation of the project allows us to keep the airport operational for as long as possible. We will minimise any inconvenience to passengers by arranging bus transport between the two terminals”, says Airport Director for Tampere-Pirkkala Airport Mari Nurminen.

“In late April, we shortened the runway by 600 metres, and decommissioned the ILS system. Despite this, air traffic is operated as usual – not a mean feat for the busiest 24/7 network airport in the whole region. Working shifts are tightly scheduled and change daily.”

The full length of the runway will again be in use between June 18 and July 17 for the duration of the World Youth Athletics Championships held in Tampere. After this, the airport will remain closed for approximately four weeks, after which it will be re-opened, in better shape than ever.

The modernisation of Tampere-Pirkkala Airport covers both lifecycle repairs and development investments.

“The runway, taxiways and apron need resurfacing, as it has been 15 years since this was last done. Additionally, two 4,000 square metre turning areas for aircrafts will be constructed, one at each end of the runway, a new 150-metre-long taxiway laid on the runway and the apron expanded by 22,000 square metres”, Nurminen lists.

In total, 330,000 square meters of tarmac, equal to the surface area of 50 football fields, will be laid in the air traffic area. Jointly with the modernisation, the lighting at the airport will also be improved. This is the most extensive modernisation in Tampere-Pirkkala Airport’s history.

The development investments will increase Tampere-Pirkkala Airport’s capacity in the future. After the modernisation, the airport will be able to easily process greater numbers of larger aircraft. In addition to more varied air passenger traffic, the investments will improve the operating prerequisites for the Satakunta Wing and Pirkkala aviation industry’s training centre, who use the airport. 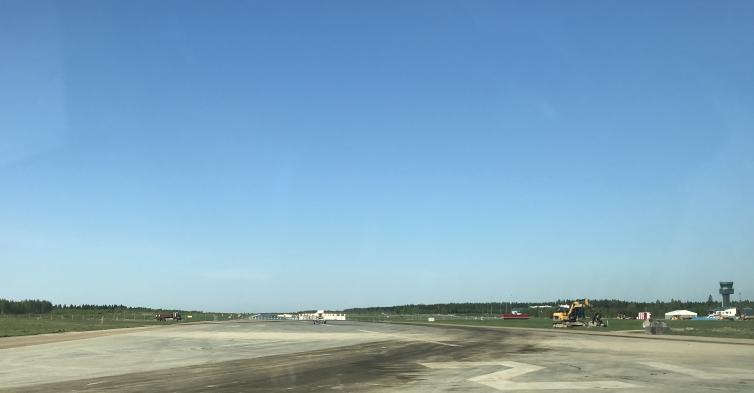 Getting busy before Summer

“First thing in the morning, over ten contractor trucks might need access to the airport area, requiring security control and assistance”, Nurminen says.

“For example, the parking arrangements for aircrafts will have to be re-planned carefully. Luckily, we’ll receive expert assistance on this from our headquarters.”

The friction caused by the modernisation and expansion has been alleviated by the supervisors’ visit to Oulu Airport last summer. They brought back many valuable lessons on the smooth navigation of such a project.

“It’s always worth seeing how things are done elsewhere”, Nurminen points out.

Finavia's website is being renewed ─ a fresher look and more accessible