Article published
15.4.2019 at 13:25
In the summer 2019, an underground wetland is to be built near Helsinki Airport. An article in Vesitalous magazine reveals this as a promising solution to improving the condition of the Veromiehenkyläpuro stream and its living organisms.

We asked Tuija Hänninen, Finavia’s environment expert specialised in water protection design, what this project is all about.

“This summer, we are starting a pilot project with the objective of reducing the odour nuisance related to the decomposition of propylene glycol and also the organic strain of the runoff of the Veromiehenkyläpuro stream, located on the east side of the Pakkala service road,” she explains.

According to Hänninen, water quality in the nearby areas of airports is mostly affected by the substances used in de-icing and ice prevention regarding airplanes and in the prevention of slippery runways during the winter season.

“The airport environment, Finnish winter, and also the amount and quality of storm waters all bring their own challenges to planning. The location and elevation of storm water outlets cannot be affected in practice, and the structures must not attract birds that might endanger flight safety,” says Hänninen, describing the challenging conditions.

Storm waters coming from the airport area contain varying levels of organic strain, but very few nutrients. During the wintertime, the waters are cold and biological action is slow. In northern conditions, the quality of storm water can be controlled with decentralized biological filter fields and centralized underground wetlands.

“Finavia recently—in the spring 2019—deployed a biological filter field, about a hectare in size, that aims to control the storm waters that let out towards the Kylmäoja stream. Stream arrangements to separate the waters of the airport and its surrounding areas have already been built in the area,” Hänninen points out.

She continues, that next the functionality of the underground wetland will be tested in order to lessen the organic strain in the airport’s south-side streams.

First, Finavia made with its partner Sitowise a general plan for the wetland. Then, to support a follow-up plan, Aalto University researched the structure of an underground wetland. The research was part of the Smart&Clean project. 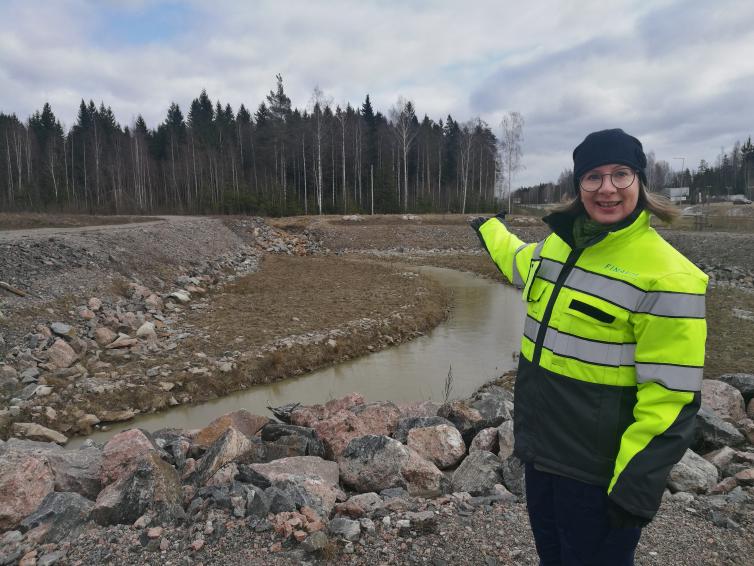 Aalto University investigated the effect aeration, nutrition, temperature and different filter materials had on the cleaning result. Conditions similar to the Helsinki Airport environment were set up in the laboratory.

For example, the vegetation layer of test cylinders filled with different filter materials was collected from the airport area. Watering was done with storm water whose organic strain and nutrition level were equal to the water quality observation material collected from Helsinki Airport.

“Watering tests revealed that aeration has a significant role in the maintenance of the structure’s good cleaning capability. Thanks to good aeration, the organic strain clearly lessened. It also reduced the odour nuisance. Another satisfying finding was that regular gravel works well as a filter material,” says Hänninen, explaining Aalto University's research results.

The building of the wetland begins in the summer. During the pilot phase, a wetland cell will be realised and its functioning will be monitored for several years. In the end, the system will consist of two wetland cells and two flood pools for the purpose of short-term discharge control.