The renewal of the official airport of Santa Claus has been completed, doubling the floor area and services at Rovaniemi Airport

Press release
Article published
8.11.2019 at 09:11
Finavia has opened the new extension of Rovaniemi Airport just in time for the holiday season. The spacious and bright new airport facilities and this winter’s new routes will bring a boost to Lapland as a whole.

“A whopping 5,000 square metres of new space, a significant increase in passport control, check-in and security control lines, new departure gates and an expanded luggage system provide a smoother travel experience and elevate the services of Rovaniemi Airport to a new level. We have substantially increased our capacity and efficiency,” says Finavia’s Johan Juujärvi, Manager of Rovaniemi Airport.

The airport’s shopping and restaurant services have also been upgraded. Ahkio Kitchen & Bar, which draws inspiration from Santa Claus and the unforgettable landscapes of Lapland, delights tourists with traditional northern delicacies such as reindeer and salmon as well as international flavours. Napapiirin Lahja, a retail operator based in Santa Claus Village, is opening a shop at the airport to give passengers access to a wide range of attractive souvenirs.

“I’m sure Santa Claus will be delighted to embark on his travels from his newly upgraded official airport,” Juujärvi says with a smile.

The extension of Rovaniemi Airport is part of Finavia’s EUR 55 million investment programme at Lapland’s airports. Rovaniemi Airport represents just under half of the total investment at EUR 25 million, with Kittilä Airport being allocated EUR 20 million and Ivalo Airport EUR 10 million. The investments improve the passenger experience at the airports and respond to the development of tourism in Lapland.

The investment programme for airports in Lapland started at the beginning of 2018. The terminal at Kittilä Airport was extended by 2,000 square metres (+20%) by an extension project completed a year ago. This autumn, two new taxiways and four additional aircraft stands (+50%) were introduced at Kittilä. The extension of Ivalo Airport will be completed by the end of November 2019. 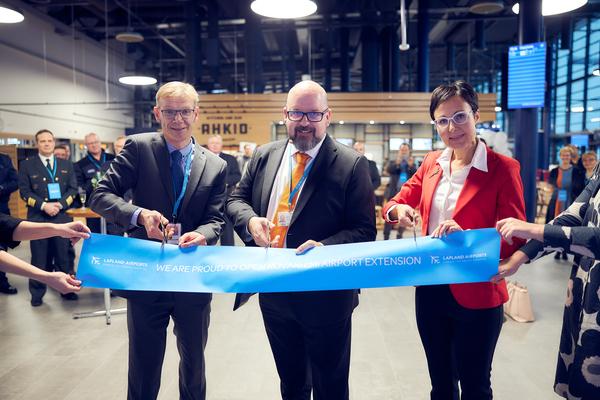 Historic launch of a new route to Rovaniemi

Turkish Airlines, one of the world’s largest airlines, will start to operate non-stop scheduled flights from Istanbul to Rovaniemi on 5 December 2019. This is a historic move, as the route is the first long non-stop flight not only to Rovaniemi, but Lapland in general.

“The new route by Turkish Airlines opens excellent connections from Lapland to various parts of the world. It links Rovaniemi with 122 countries and more than 300 destinations. Flights will be operated three times per week during the winter season: on Tuesdays, Thursdays and Sundays. Turkish Airlines also becomes the first airline that offers business class service to Lapland,” says Petri Vuori, Vice President, Sales and Route Development at Finavia.

Another significant flight connection will be opened on 21 November when Easyjet starts operating flights between Manchester and Rovaniemi. Winter flights will be operated twice weekly, on Mondays and Thursdays.

“The number of flight connections to Lapland as a whole will increase during the Christmas and winter season. Several international connections will be introduced in addition to domestic flights. The airlines’ own websites are the best source of information on the prices, dates and times of the scheduled flights,” Vuori points out.

The Christmas and winter season will also bring a large number of charter flights from various parts of Europe. The number of flights varies from one week to the next depending on demand.

“Some holiday travel operators, such as TUI and Catai, also sell flights in addition to travel packages. This means that the people of Lapland can also take advantage of non-stop return flights to Spain, for example, by buying tickets for a charter flight,” Vuori adds.

All of Finavia’s airports have achieved carbon neutrality this year. The reduction of the carbon footprint of the airports in Lapland has been recognised under the international ACA (Airport Carbon Accreditation) certification system for airports. Helsinki Airport was already certified in 2017. Finavia’s next goal is to achieve zero emissions at its airports by 2030. 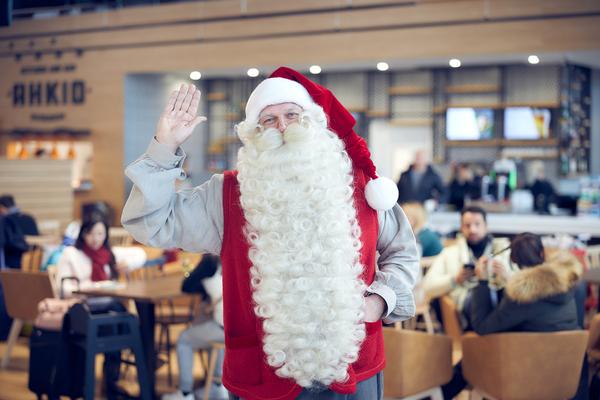 Santa Claus visited the opening ceremony of the new expansion of Rovaniemi airport.

The Rovaniemi Airport extension project in a nutshell