Press release
Article published
14.10.2020 at 10:12
The passenger volume of Finavia’s airports fell by 90 per cent in September compared to the previous year. Finavia’s statistics for September indicate that the decline in passenger volume at Helsinki Airport was even sharper at 92 per cent.

“There is no end in sight for the difficulties faced by the aviation industry. Helsinki Airport’s position as a hub for air travel between Asia and Europe and as a significant European airport is at risk due to the COVID-19 pandemic,” says Finavia CEO Kimmo Mäki.

According to Mäki, Finavia’s airports served flights to 200 direct destinations around the world a year ago. The situation is now completely different. The airports have gone quiet and there is practically only one country of restriction-free travel between Finland and the rest of Europe at present.

“Unfortunately, the recovery of air traffic in Finland is lagging behind the rest of Europe to a considerable extent,” Mäki points out.

“Some 20,000 people work at Helsinki Airport, employed by about 1,500 different companies. Their jobs are now at risk. The situation also concerns the other people who work in the travel industry in Finland. The industry employs some 140,000 people across the country,” Mäki says with concern.

Air traffic and the travel industry are engines of the Finnish economy. They represent nearly three per cent of Finland’s GDP. The aviation industry also has significant cascade effects on other sectors, including services, transport and construction. The volume of air freight passing through Finavia’s airports declined by 55 per cent in September.

Statistical summary and the development of passenger volumes in 2020 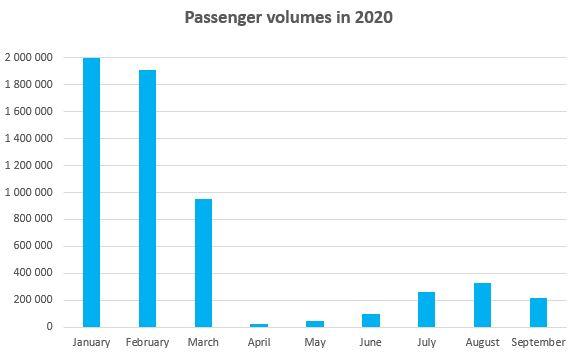 Airport-specific air traffic statistics are available on the Finavia website.

Images for use by the media.

Finavia’s statistics: Air travel recovered towards the end of the year – airports in Lapland had an excellent Christmas season