Article published
15.5.2020 at 15:29
The impact of the coronavirus pandemic on the Helsinki Airport community has been significant. Finavia seeks to support its contractors and subcontractors by continuing its ongoing massive development programme.

Finavia has had to adjust its operations due to the fall in air traffic caused by the coronavirus, and it has closed terminal areas, services and runway 3 at Helsinki Airport. At the same time, Finavia has assessed all of its development activities. Despite the current situation, a decision was made to continue the Helsinki Airport Development Programme, as it is a long-term investment that aims to provide air passengers with a good level of service and offer airlines the capacity they need far into the future.

The extension offers efficiency and style

The large square-shaped departure hall of the new Terminal 2 will include six separate departure areas.

“The departure areas could be described as islands. When you enter the departure hall, there will be two islands on both sides. You can find the remaining two islands when you walk towards the security control area,” says Martti Nurminen, the Project Director of the Helsinki Airport Development Programme.

Joint use and flexibility

The Terminal 2 departure hall will have 86 check-in desks and points. There will be four points, located near every island, for special baggage. Even though the number of check-in desks and  points increases only a little compared to the current number, their capacity and flexibility will increase considerably.

“Using a single departure hall creates an opportunity for the efficient joint use of check-in desks and points. Flexibility makes it possible to change the way the facilities are used in the future. The security control process also becomes faster and more efficient as we introduce new technology,” says Nurminen.

Nurminen also praises the new departure hall’s architecture in addition to its functionality.

“The massive wooden eave of the terminal’s entrance continues inside as a wooden suspended ceiling. I believe that it will become one of the landmarks in the history of modern Finnish architecture.”

Some of the baggage conveyor belts will be built in a new way, which also makes it easier for passengers to pick up their baggage. Passengers will be able to walk around the conveyor belts. 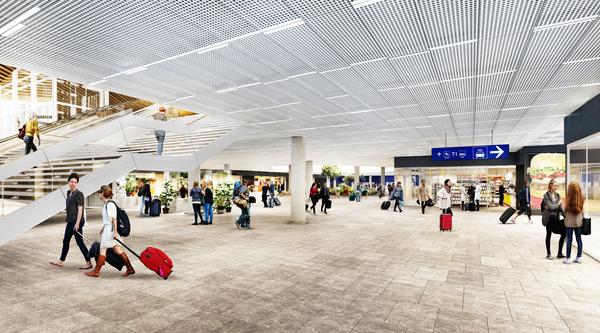 The parking garage will be covered with solar panels

The extension of Terminal 2 is progressing as planned. Right now, a facade is being installed on the eight-storey parking garage that will be completed this year.  The building will be covered with solar panels that support Finavia's sustainability and environmental goals.

The frame of the Terminal 2 extension is currently being built. A roof is being installed over the new security control area. The bridge structure of the ramp in front of the terminal is also under construction.

“In terms of disruptions, the current stage of the work is stable. For example, the temporary route that was opened last year can be used for moving between the new parking garage to be completed this summer and the current terminal,” Nurminen says.

The experience gained from the exceptional situation is being used to design the new terminal.

The new terminal being built at Helsinki Airport combines efficiency and style – both are essential for a pleasant passenger experience.

Two thirds of the programme has already been completed

The development programme began in 2013 and it is meant to be completed in 2023. The work has progressed on schedule and on budget, and 70% of the entire programme has been completed at this point.

In the future, the development programme will be carried out in accordance with the original plan to the extent that is possible in these exceptional circumstances, while taking into account the total resources available and the availability of materials. The contract structure created for the construction projects also allows flexible pausing or modifying of the programme if necessary.