Article published
24.4.2020 at 15:09
Finavia’s successful and pioneering international marketing efforts won an award in the GrandOne competition for digital media on 23 April. The campaign, which brought Tallinn residents’ real Instagram photos to the streets of the city, won the best digital outdoor advertisement category.

The thought behind the Tallinn Holiday Album campaign was that advertisement photos seen on the streets rarely feel personal. Would people feel differently if the faces in the photos looked familiar? This was the idea of the campaign advertising Helsinki Airport’s over 160 direct connections: the photos used for marketing travel destinations came from Estonians who had visited them.

Over one night last autumn, almost all outdoor advertisements in Tallinn got a new look as travel photos taken by the locals took over the streets of Tallinn. The travel photos were displayed in the neighbourhoods of those who had taken the photos, to the delight of commuters. The appearance of the outdoor advertisements stayed faithful to Instagram, even down to the comments written for the photos by Helsinki Airport.

“Our campaign was very successful last autumn and got positive reactions both in Estonia and abroad. Tallinn residents were delighted by the campaign and the opportunity to get their own travel photo on an outdoor advertisement. We were able to reach Tallinn residents well and get our core message across – Helsinki Airport is located close enough to be another home airport, and we offer over 160 direct connections to the holiday of customers’ dreams. The win feels particularly good now that air traffic is facing the greatest challenge in its history. We will recover from this,” says Katja Siberg, Finavia’s SVP Marketing, Corporate Communications and Customer Experience.

The rationale for the win in the GrandOne category was given as follows: “Simple and therefore ingenious. Flows smoothly from the digital to the analogue and back again and easily charms its target groups in both. Insight, i.e. the sharing of experiences, is at the heart of things. Considered and carried through to the end. We are struck by advertisement envy.” GrandOne is meant for Finnish digital media projects that are published or clearly updated. 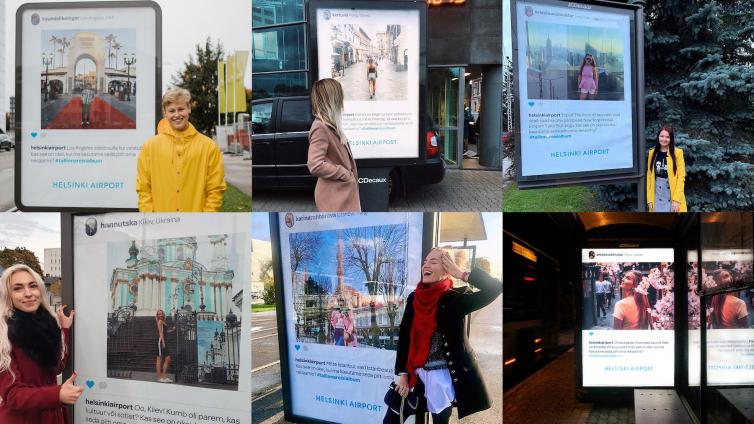 The campaign was carried out last autumn, from 30 September to the end of November. You can still take a look at what photos and experiences Tallinn residents shared in the campaign by checking the hashtag #tallinnareisialbum on Instagram.

Finavia’s statistics: Air traffic is recovering at a fast pace