Article published
12.5.2021 at 10:26
With two years remaining, the airport development programme has had minimal effect on passengers and operations and is ahead of schedule and within budget.

“One of our objectives has been for the development project to reflect Finnishness,” says Tuomo Lindstedt, Project Manager of the terminal extension project at Finavia.

“We wanted Finnish nature, for example, to be incorporated into the design. Since wood is important in Finnish nature, we will have a wooden ceiling in the new terminal.” 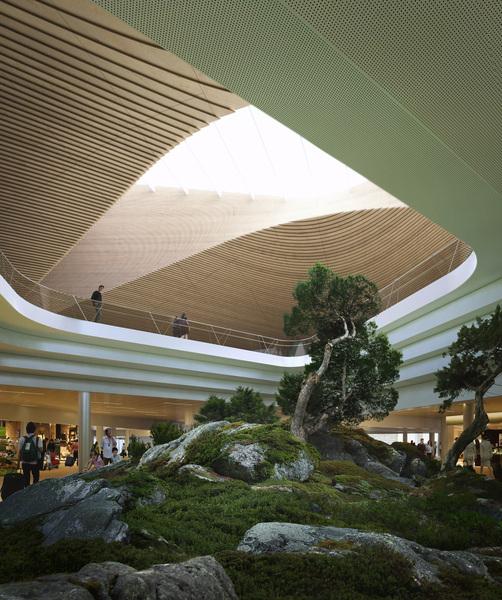 He continues, “when arriving in Finland, the first thing that passengers see is a nature element called Luoto which is like rocks and islets, and this element is reflected in the Finnish nature within the terminal. The terminal is designed to feel like Finland. That’s what the project will look like when it’s finished.”

A phased approach for minimal disruption

The majority of projects underneath the Helsinki Airport development programme umbrella have either been finished or are close to being finished. By the end of 2021, the new arrivals and departures hall will be finished, and the renovations of the existing terminal have also started a year ahead of schedule.

“Cost-wise, the renovation of the existing terminal is one of the smallest parts of the programme, but because it is being done in an actively operational terminal, right next to passenger routes, it’s complex and delicate,” says Lindstedt.

“It requires a lot of phasing and that’s why it takes so much time, compared to the larger construction parts of the programme.”

Helsinki Airport’s development project began in 2013 in order to address the rapidly increasing number of passengers flowing through the premises. When construction first started in 2016, the main cause of increasing demand was identified to be the rising number of transfer passenger numbers from Asia.

“To meet this rise in demand, we needed to expand,” says Nora Immonen, VP and Director of Commercial Services at Finavia.

The programme has been implemented in phases, including planning and design, in order to allow the airport to be fully operational throughout the development.

“When we are able to gradually move landside operations from the current terminal building, we will create more space there for further Finnish services and experiences. So, our vision is for Helsinki Airport to be a great business card for Finland and for people to take happy memories of Finland with them when they leave.”

Working to make travel even smoother

For years, Helsinki Airport has been working consistently to build a strong brand based on customer processes, health and safety measures and smoothness. This work has proven to be successful, reflected in the airport being recently selected as the best European airport in its size category for 2020.

“Winning this award feels like a big achievement for all of us here at Helsinki Airport,” says Lindstedt.

“We managed it even with renovations going on. I would say that Helsinki Airport won this award because it is efficient, clean and – above all – a smooth experience. And the aim of the development programme is, and always has been, to make that experience even smoother.”

From a customer and staff perspective, commercial landside services will be combined and positioned alongside customer flows, with the intention of creating an even more straightforward travel experience for passengers.

“Helsinki airport feels like a medium-sized airport that makes travelling easy and simple, non-crowded and well-managed,” says Immonen. “Our strategy has always been to maximise that feeling, and the airport development programme has supported that and will continue to do so in the future.”

The renovation work being done to simplify the airport’s baggage reclaim process is a good example of how Finavia is making travel smoother for passengers. In the past there have been two reclaim halls in Terminal 2, which have had the potential to cause confusing situations. Soon, those two reclaim halls will be merged into a single reclaim hall.

“When those halls merge into one, people coming to meet or greet passengers won’t have to wonder if they’re in the correct place,” says Lindstedt. “There will only be one place to be. In the past, the baggage reclaim process has suffered from bottlenecks, but soon it will be much more free-flowing thanks to a higher capacity.”

Most recently, the entire west wing area of the airport – the extension to the non-Schengen terminal part – has been put into use. The programme is due to be fully completed by 2023.

“The new parking area was definitely a huge milestone in the ongoing development programme,” says Lindstedt. “It contains about 1,600 parking spaces , and it’s ready and waiting for when passenger demand begins to rise again.”

As each phase in the development programme is completed, customer experience will improve in those areas. For example, various modes of transport will be made more accessible in the new terminal building. There will be a shorter connection to the railway than there was previously, and coming to and from the airport will be more straightforward.

“We are confident that the pandemic will subside and that demand for travel will rise again,” says Immonen.

Lindstedt adds, “when passenger demand does increase again, Helsinki Airport will be ready to meet that demand with a better passenger experience and new facilities."

This article is based on An easy, smooth and Finnish travel experience at Helsinki Airport published in International Airport Review.