Finavia and Finnair fulfilled a senior citizen’s dream: Lempi Meskus, 92, visited an airplane for the first time in her life

Article published
16.8.2018 at 09:00
The dreams of senior citizens of Kuusamo are being fulfilled in celebration of the 150th anniversary of this northeastern town. Finavia and Finnair were given the opportunity to make 92-year-old Lempi Meskus’ dream come true by offering the lady a visit in an airplane.

It’s a hot July afternoon, and a rather unusual group of people have gathered in the cafeteria next to the gate area of Kuusamo Airport. A window table is occupied by an elderly lady in a wheelchair, her daughter-in-law who has joined in as her companion, the airport manager and a couple of reporters with their cameras. None of them possesses a plane ticket, but they are nonetheless about to enter the plane from Helsinki, which will be landing soon. 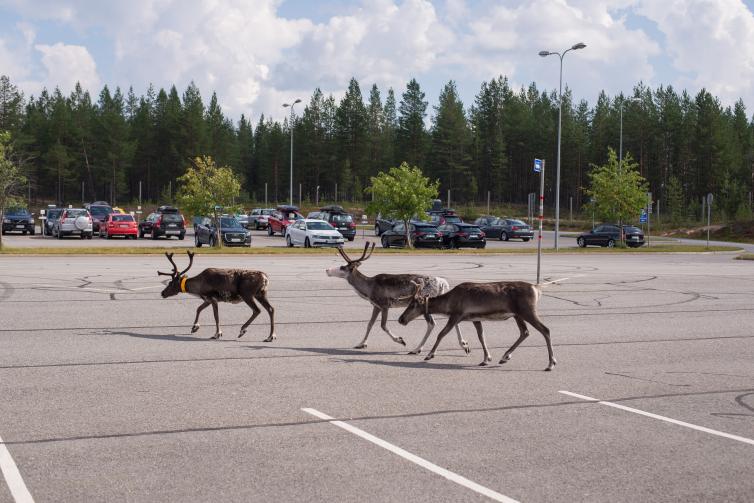 The purpose of the occasion is to realise the dream of Lempi Meskus, 92. She has never been on an airplane, and now Finavia and Finnair are offering her a tour of a plane. The event has even attracted some representatives of local media.

The endeavour was initiated in May, when Sari Päivärinta, Airport Manager at Kuusamo Airport, was contacted by the town of Kuusamo. In celebration of the town’s 150th anniversary, the town hopes to fulfil a dream of 150 elderly citizens of Kuusamo. Town officials asked Päivärinta if Finavia would like to participate in making one senior citizen’s dream come true.

“This was such a lovely dream that we absolutely wanted to take part. I was personally moved by Lempi’s wish,” says Päivärinta, who first started working at Kuusamo Airport in 1988.

While waiting for the plane to arrive from Helsinki, there was plenty of time to get acquainted with the special guest over a cup of coffee and a Danish.

Feet on the ground

Lempi Meskus has done her life’s work taking care of her family’s smallholding in Kuusamo. Having raised nine children, she has been on pension for around thirty years already. As Lempi and her husband Olavi got older, they have had to leave their small farm behind and move to the centre of Kuusamo where services are close. However, the couple still reside in their own apartment.

Lempi Meskus has spent her entire life in Kuusamo. Meskus states that she has neither travelled abroad nor set foot in a plane ever before. The lady has also stayed off ferryboats, although she has travelled within Finnish borders by car and train. However, with her family members living in Southern Finland, she is familiar with Kuusamo Airport where she has seen off her offspring.

“The nurse that visits us at home daily mentioned the 150 Dreams Project and said that I should think of a dream, too. I told her I’d never been inside an airplane. That’s how all this got started,” Meskus shares.

“But it took a whole lot of persuading before they had me convinced! If I’d known this was set up for me alone I would have refused to go.”

A tour of the cockpit with the captain

The plane from Helsinki lands, and passengers step out. It’s time for Meskus’ visit. As the group approaches the plane, the lady, strained by the heat, is worried that her feet will not carry her up the stairs all the way to the plane. Sari Päivärinta and the ground handling crew assure her that if necessary, she will be carried on board.

Captain Jerome Rühlmann and his crew greet Meskus at the foot of the stairs. On behalf of Norra, which operates the route between Kuusamo and Helsinki, Rühlmann welcomes the lady, presenting her with a small gift – a scale model of the ATR-72, the 68-seat propeller plane used on domestic flights.

Flight attendants assist Meskus in climbing in the plane. In the cabin, she tries out how it feels to sit in a passenger seat. She is offered coffee, tea or bilberry juice, but refuses. Soon she is taken into the cockpit, where the captain introduces her to the meters, buttons and devices. A brief conversation with the co-pilot about the Kuusamo region wraps up the visit. It’s time for the plane to head back to Helsinki.

Meskus’ company is left to speculate whether Lempi will soon enough end up buying a ticket to Helsinki to visit her children.

Read more about the magical destinations in Lapland

Favourite places and sights in Kittilä: “Experiences all year round”