Article published
22.7.2019 at 09:00
Helsinki Airport is an important place for newlyweds Elina Lehtimäki and Juha Ahola who both call it their workplace. The couple wanted to have their everyday surroundings captured in their wedding pictures.

“We both like aviation and travelling in general, so an airport felt like a natural venue for our wedding pictures,” says Elina Lehtimäki, Finavia’s Manager of Telecommunications Services. Together with her husband, she decided to arrange their wedding photoshoot at the impressive surroundings of Helsinki Airport.

The environment is familiar for both newlyweds, as also Lehtimäki’s husband Juha Ahola works at the airport as a Systems Advisor at ANS Finland, a service provider for air traffic control services.

“Our workplaces are located next to each other, but we hardly ever communicate at work,” Lehtimäki shares.

Even though the photos were taken at the airport, the wedding party was held with a small group elsewhere. Lehtimäki and her husband were hoping to convey the familiarity of the place and the sense of space in their wedding pictures, which were taken around the Helsinki Airport apron, conveniently capturing the airplanes in the background.

A romantic place and a unique working environment 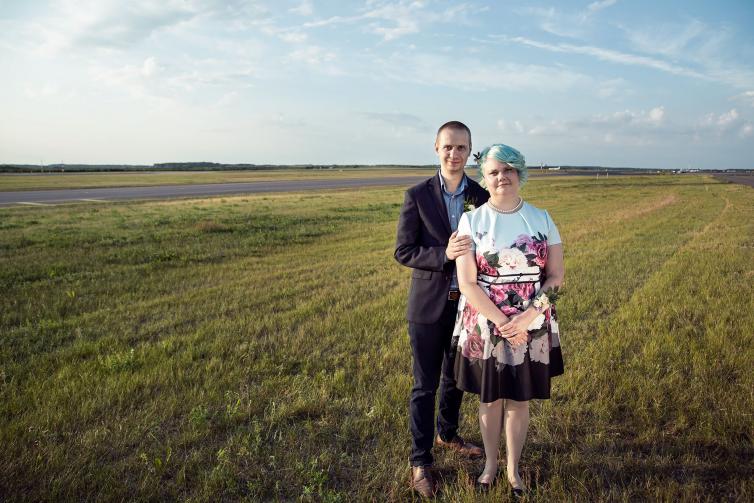 The arrivals hall is often filled with happy reunions, whereas the departure hall can also be a place for teary goodbyes. The entire spectrum of feelings is present at Helsinki Airport.

“It is great to get to see parents saying farewell to their kids who are starting their travels, or couples reuniting after a long break. Undeniably, we have quite a romantic workplace,” Lehtimäki laughs.

In addition to unforgettable encounters and a spectrum of feelings, Lehtimäki is thrilled about the constant development taking place at the airport. Both Lehtimäki and Ahola have a deep appreciation for their workplace which is currently undergoing an interesting expansion phase.

“This is truly a unique working environment. Every day we get to see how the airport is growing and developing,” Lehtimäki states.

Off to the honeymoon – via workplace!

Many couples pass through Helsinki Airport on the way to their long-awaited honeymoon, and Lehtimäki and Ahola are no exception. Thanks to their jobs, the pair knows a thing or two about the airport’s best routes and services.

“I guess we’re able to find the Wi-Fi connections, available security checks and the quickest routes to the gates even faster than the average passenger,” Lehtimäki says.

Following a mini vacation in Berlin right after their wedding, the couple will jet off on their actual honeymoon in September and pass through – where else? – Helsinki Airport.