Press release
Article published
11.4.2019 at 11:57
The huge construction site in front of Terminal 2, covering an area equivalent to nearly three Esplanadi parks in Helsinki, will expand as the summer approaches. Consequently, public transport at Helsinki Airport will be rearranged in April and May.

– The routes of the airport’s buses and taxis will change and the bus stops will be relocated by the beginning of June. The arrangements are due to the ongoing extension of Terminal 2 of Helsinki Airport. Among other things, the airport will get a multimodal travel centre that enables developing trip chains and planning improved public transport connections, says Landside Director Jukka Isomäki at Finavia, who is responsible for the ground traffic at Helsinki Airport.

Carried out in three stages, the bus and taxi arrangements concern traffic at Terminal 2. These temporary arrangements will be in place for a couple of years until the magnificent entrance of Helsinki Airport with its new arrivals and departures halls is completed in 2021. The new indoor car park will be completed as early as next year.

– Before arriving at the airport, we recommend checking travel updates for Helsinki Airport on the Finavia website. In addition, passengers are instructed to arrive at the airport early. They should make sure they have time to reach the terminal and make it to their flight on time, Isomäki notes.

The Terminal 2 taxi station will relocate on 15 April

The current taxi station in front of Terminal 2 at the arrivals level will be relocated to the terminal’s ground floor. Passengers will access the new taxi station from the terminal via an escalator in Arrivals hall 2A or by taking the lift down one level to floor P. 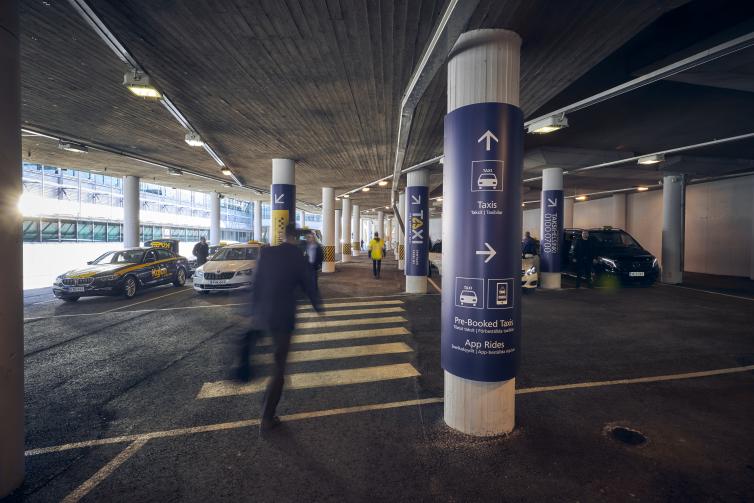 Picture: Taxis are now located in the ground floor of the terminal.

The bus station and disabled taxis will relocate on 15 May

The bus arrivals and departures platforms of Terminal 2, as well as the waiting area for disabled taxis, will move from its current location by approximately 100 metres towards the airport’s office buildings in front of the Scandic hotel.

The pickup and drop-off points for hotel and parking operator shuttle buses are located opposite the WTC building (Lentäjäntie 3), in front of the P5 parking garage.

Buses will access the Terminal 2 bus station via Teletie-Lentäjäntie instead of Terminaalitie as before. 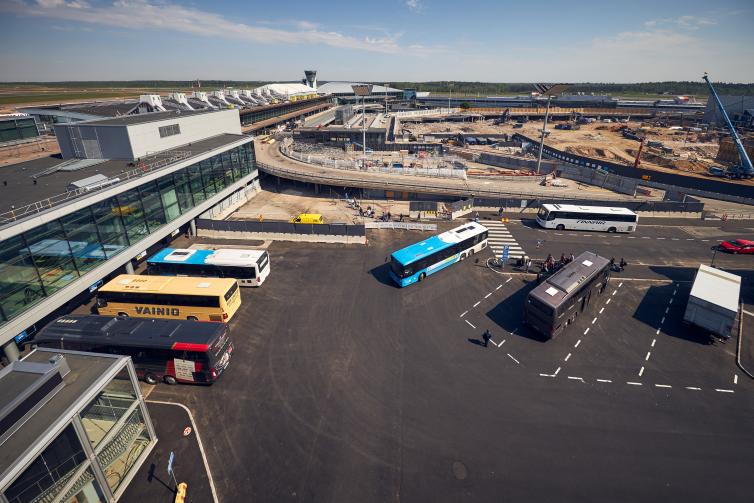 The ramp leading to the main entrance of Terminal 2 will be demolished during the summer, and the area in front of the check-in can no longer be accessed by car from 23 May onwards. Instead, taxis and passenger cars can drop off passengers one floor below.

A new drop-off zone will be opened, with an escalator connection to the check-in area. Stopping briefly at the drop-off zone for dropping off passengers is allowed but parking is not permitted.

People who are accompanying—or especially meeting—passengers can park in the short-term P3 parking area. Using the parking spaces costs EUR 1 for every 10 minutes, which amounts to EUR 6 per hour. Exiting the parking area is free of charge within 10 minutes of entering. 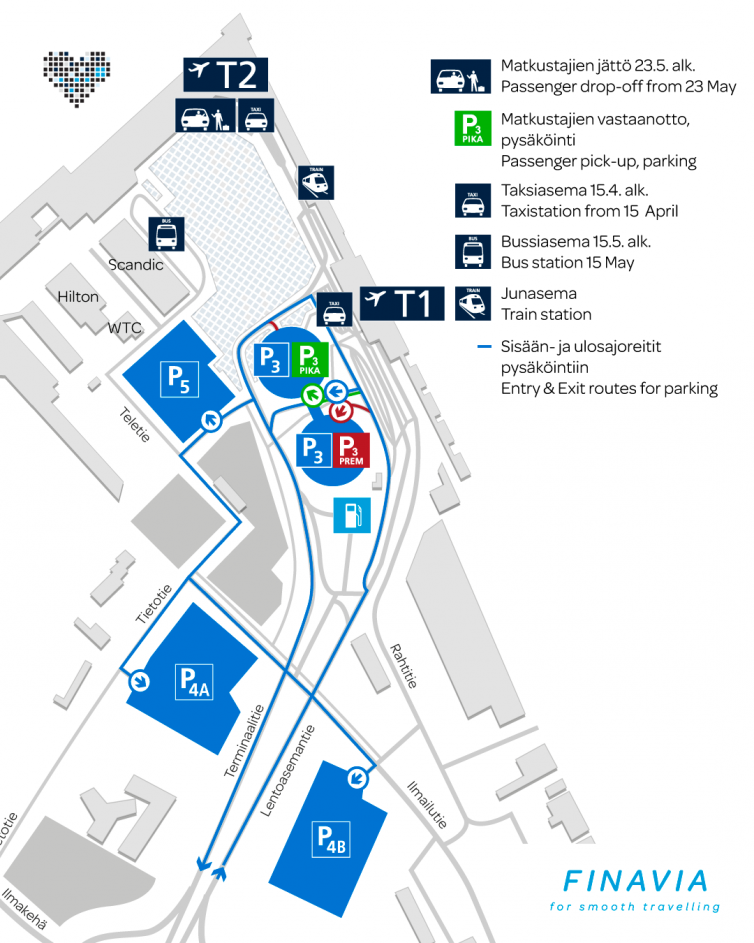 What is the reason for the changes in front of Terminal 2?

The changes to driving routes and bus stops taking place in April and May are part of the expansion of Terminal 2 and related to Finavia’s EUR 1 billion development programme at Helsinki Airport.

The rearrangements introduced now will mostly be completed by the end of June when the construction project will enter a more permanent stage. No other major changes are expected at this point.

This is how the airport changes.

Traficom: Decision made on the tendering process for scheduled flights to Joensuu, Jyväskylä, Kemi, Kokkola and Kajaani