Article published
22.11.2019 at 09:00
Helsinki Airport celebrated the opening of a new Christmas area in terminal 2’s non-Schengen area on November 19. The cosy Christmas cabin is decorated with a Finnish style and invites travellers to stop and enjoy the holiday atmosphere. During the opening, the Christmas hut’s new character, Finavia’s own elf Aamu Eerhartti was also introduced.

It began to look like Christmas at Helsinki Airport in November as the airport’s own Christmas cabin was opened in terminal 2’s non-Schengen area. The cabin, built entirely of Finnish wood, is a cosy, Christmas nest that invites passengers of all ages to relax in the middle of all the airport’s hustle.

“Our aim was that the Christmas cabin’s appearance and decoration would be very reminiscent of a Finnish space. The cabin combines modern and traditional interior design in a very Finnish way,” says Finavia’s Passenger Experience Co-ordinator Sini Heliövaara. “We built the cabin in the non-Schengen area, so passengers that only have a layover at Helsinki Airport can also get a taste of Finland. The cabin’s instruction signs are in Finnish, Swedish, English, Russian, Chinese and Japanese.”

Finnish handicraft and a sauna

The cabin utilises as much Finnish design as possible. The red and white carpets, a captivating rya hanging on the wall and many of the decorative items are Finnish handicraft. In addition, the cabin has a beloved Finnish Christmas tradition, a sauna. As a fun surprise, the sauna has a collection of scents that go with Christmas. Visitors can try the scents through hatches located above the benches.

Before take-off, the youngest members of the family can entertain themselves by reading Christmas stories and listening to carols in Finnish, Swedish and English. In addition, holiday atmosphere is created by numerous elves, Christmas goats and a small elf door.

“There’s also a nice list in the Christmas cabin and visitors can write down all the nice deeds that they have done during the year,” Heliövaara hints. 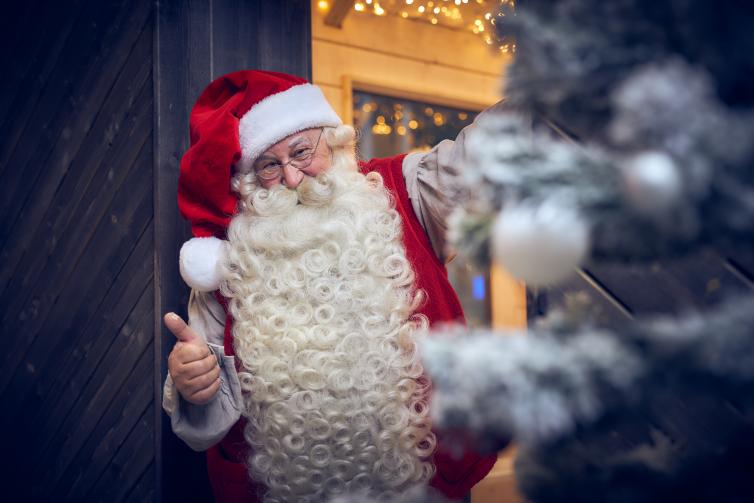 During the opening, the Christmas cabin’s own character, Finavia’s Elf Aamu Eerhartti was also introduced. Aamu elf was created in collaboration with the Santa Claus Foundation, and she was present at the opening in the form of a character made of plywood.

”Aamu elf represents the warm customer service spirit of Finavia’s airports. She has the same scarf around her neck as our other employees and a walkie-talkie in her pocket, so she can help travellers as quickly as possible. We wanted to create an elf that brings joy to everyone,” explains FInavia’s Marketing Coordinator Kati Hollmén.

Visitors can read more about Aamu elf at the Christmas cabin. The story also tells that in addition to helping travellers, Aamu can also participate in airports’ exemplary snow clearance work by driving one of the slow ploughs for example.

In addition to Aamu, Santa Claus and a choir of elves were also present at the Christmas cabin’s opening.

Trains do not stop at Helsinki Airport at the moment

Finavia’s measures to reduce the spread of the coronavirus epidemic