Finland's oldest passenger plane DC-3 returns to Helsinki Airport for the summer: “The aim is to keep flying a hundred years”

Press release
Article published
21.5.2021 at 08:44
After a long break, the almost 80-year-old DC-3 aircraft OH-LCH will fly again from airport operator Finavia’s Helsinki Airport. It has been seen at Helsinki Airport ever since the establishment of the airport.

The former Aero (currently Finnair) DC-3 aircraft, OH-LCH, will resume flights from Helsinki Airport for the summer after a long break. It is currently the oldest passenger aircraft in Finland that is still in use. Its owned by Airveteran Oy and operated by the DC Association.

“We want to support this valuable and historic activity. In order to enable the DC-3 to fly from Helsinki Airport in the airport’s current, modern form, we have made numerous special arrangements. This rare opportunity arose due to the airport being quieter than usual due to COVID-19,” says Jani Elasmaa, Finavia’s Vice President responsible for Helsinki Airport’s runway and apron operations.

The almost 80-year-old aircraft has been used not only by Finnair but the Finnish Defence Forces as well. The first planes to land at Helsinki Airport in 1952, Lokki and Tiira, were the same type of aircraft. Next year, it will be 70 years since the airport was opened.

“This DC-3 is part of Finnish aviation history and has museum value. There are not many of these left in the world anymore. This particular aircraft has operated from Helsinki Airport since the airport was established,” Elasmaa says. 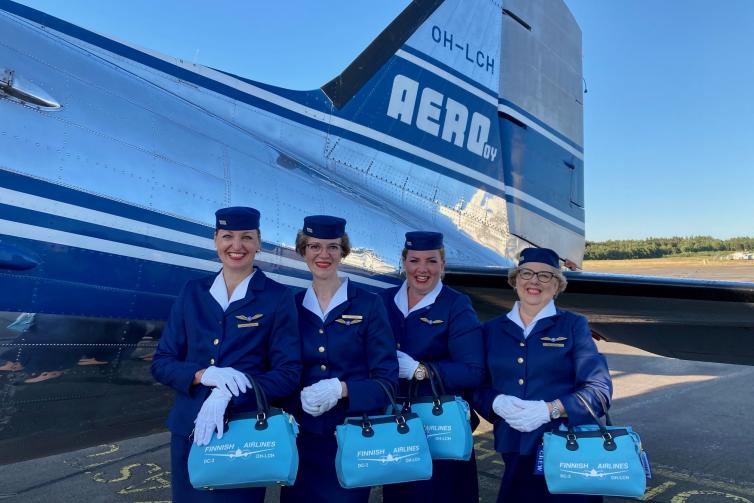 Its last scheduled Finnair flight was in 1967. Last time it flew from Helsinki Airport was 20 years ago.

The COVID-19 situation permitting, the association's first flight this summer will be flown at the beginning of June.

“It is great to be able to fly from Helsinki Airport again,” says Petri Petäys, Chairman of the Board of the DC Association.

The aircraft will be transferred to Helsinki Airport next Sunday, 23 May, from Finavia's Vaasa Airport hangar. The aim is to fly 40 member flights during the summer with the 19-seat aircraft.

The association also operates charity flights, including those to delight the young patients of the Children's Hospital. At the moment, these flights have been suspended due to the COVID-19 pandemic.

“The flights are a fantastic experience for the young patients, and likewise for us, who get to join in the flight as pilots, pursers and mechanics,” says Ahti Pohjonen, Secretary and Board Member of the DC Association.

The DC Association complies with the EASA health safety protocol on its flights. All pilots in the Association are professional airline pilots.

“Our vision is to keep this aircraft flying a hundred years. That is the first milestone.”

The Åland Islands captivated our airport manager from a young age: “The island is gorgeous all year round”