Statistics: The recovery of air traffic accelerated as autumn approached

Press release
Article published
13.10.2021 at 10:31
The passenger volumes at Finavia’s airports have turned to substantial growth since July according to the company’s latest statistics on air traffic.

In July–September, the number of passengers at Finavia’s airports increased by nearly 90 per cent compared to the corresponding period last year. A total of 1.5 million people travelled through the airports.

The growth of air traffic is the most evident in the figures for Helsinki Airport.

“In September, we had days of approximately 20,000 passengers at Helsinki Airport, compared to less than 400 when traffic volumes were at their lowest. The trend is positive, but there is still a long way to go before the pre-pandemic daily volumes exceeding 60,000 passengers are reached. The rate of our recovery still lags behind other European airports,” Vuori points out.

Long-term comparisons indicate that passenger volumes are still well short of the pre-pandemic levels. Between January and September, the number of passengers at Finavia’s airports was less than half of the previous year’s figure. The passenger volume for the period was 2.5 million, compared to 5.8 million in 2020. In 2019, before the pandemic, the corresponding figure was 19.6 million.

Over two million passengers travelled through Helsinki Airport in January–September, with 78 per cent of them travelling abroad. International transfer travel has not yet resumed in earnest due to the low volumes in air traffic between Asia and Europe.

“So far this year, European destinations have represented the majority of international flights from Finland. The familiar favourites Spain and Greece have been popular among travellers since the summer. Germany and Sweden are also moving up the list. The city destinations with the highest volumes were Paris, Amsterdam and Munich.”

The outlook for the future is positive if tourism continues to recover at the current rate.

“We have good opportunities for growth due to the opening of the new-look Terminal 2 at Helsinki Airport in December. The new facilities set to open in December include a new entrance, a new arrivals hall and a multimodal travel centre. The project will be fully completed in 2023. We will soon have excellent new premises that people in Finland can be proud of.” 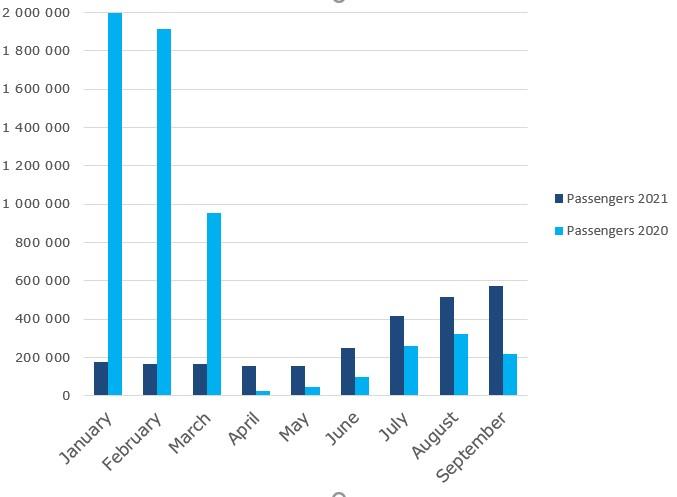 The figures for domestic air travel are lower than the long-term averages. Between January and September, some 497,500 people travelled from Finavia’s network airports, which is 59 per cent lower than in the previous year. Domestic tourism recovered as autumn approached. During the July–September period, the passenger volume at Finavia’s network airports was twice as high as in the previous year. The number of passengers was 238,000.

“Traffic from our network airports has increased. Holiday flights to destinations in the south are already available from several domestic airports. Oulu and Rovaniemi were the most popular domestic destinations. The hiking and fishing destinations Kittilä, Ivalo and Kuusamo have attracted an encouraging number of passengers in the autumn. Travel as a whole seems to be recovering,” Vuori concludes.

Check all the statistics here.

Decisions of The Ordinary General Meeting of Finavia Corporation