Finavia’s airports are carbon neutral. Our aim is to further decrease the carbon dioxide emissions caused by our operations and reduce emissions to zero at all of our airports.

Our climate programme started in 2008, which is when we began to calculate our carbon footprint and reduce emissions. Nine years later, after a lot of hard work and determination, Finavia’s operations at Helsinki Airport were certified as carbon neutral. Our airports in Lapland achieved carbon neutrality in 2018 and the rest of our regional airports followed in spring 2019. 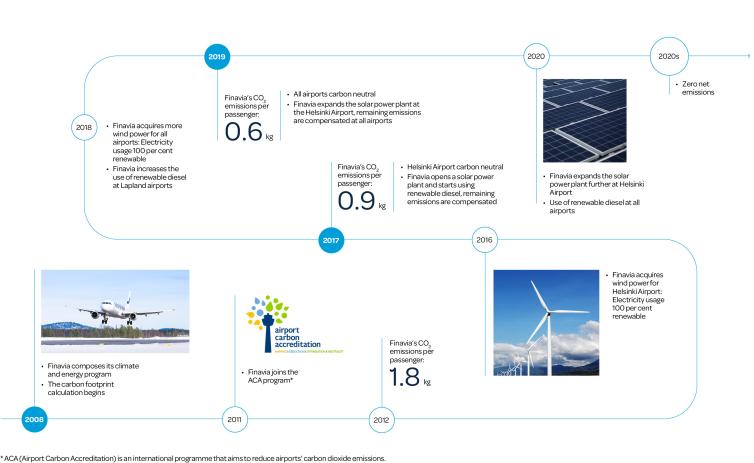 Our next goal is zero net emissions. This means that the remaining minor carbon emissions of our operations can be sequestered to eliminate them from the atmosphere. We have drawn up a master plan to achieve this goal in the next few years.

How have we reduced emissions at our airports?

The CO2 emissions of airports mainly arise from the lighting of terminals and other consumption of electricity, heating, cooling and the energy consumption of field vehicles.

We have significantly increased the use of renewable energy. We use certified wind power and generate energy ourselves with our own solar power plants.

Our field vehicles are powered with diesel fuel made from waste materials and leftovers.

In heating, we use renewable sources of energy, such as pellets, when possible. Half of our airports are heated using Finnish wood-based biofuel.

We have made significant investments in improving energy efficiency through, for example, LED technology and automation.

After minimising the CO2 emissions caused by our operations, we offset the remaining emissions by funding ACA-compliant projects. The projects are focused on countries that struggle with environmental problems.

Carbon-neutral airports are a step towards lower-emission air travel

We understand that carbon-neutral airports will not solve the climate challenges of the entire global aviation industry. However, we want to play our part in the air traffic value chain for a cleaner world.

We engage in climate cooperation with the entire value chain and have extended our climate programme to also include other companies operating at our airports. For example, we have worked together with airlines and the air navigation company to shorten airplanes’ taxiing distances and develop the use of airspace in a way that reduces fuel consumption and emissions.

Green flights now represent 70–80% of all takeoffs and landings at Helsinki Airport.

We promote zero-emission air traffic in various ways. For example, we are involved in financing the development and testing of Finland’s first electric aircraft.

We are a key partner in the joint commitment of European airport companies which aims for 100 carbon-neutral airports in Europe by 2030. Finavia’s airports represent 20 per cent of this target. For Finland’s part, the target was already achieved in 2019.

Helsinki Airport is located on the shortest route between Europe and Asia. For airlines, this means flights with lower fuel consumption and lower emissions.

The distance from Helsinki Airport to Beijing is approximately 6,300 kilometres. This is over 1,000 kilometres less than from Berlin to Beijing. Passengers are also encouraged to choose the most environmentally friendly flight route.

The electricity use of Helsinki Airport is produced with 100 % renewable energy.

The airport buses run on residue and waste.