Press release
Article published
21.3.2018 at 19:05
Helsinki Airport has been voted the Best Airport in Northern Europe by passengers in the SKYTRAX World Airport Awards. The results were announced at Passenger Terminal EXPO in Stockholm, Sweden on 21 March 2018.

”It is an honour to receive this award by passengers all around the world. It is the best way to verify that our hard work towards enhancing customer experience in Helsinki Airport is paying off. At the same time, I want to warmly thank our Finavia personnel and all of our partners here in Helsinki Airport; without their contribution, this result could not have been possible”, says Helsinki Airport Director Ville Haapasaari from Finavia.

Finavia is constantly developing services at Helsinki Airport, keeping customers’ point of view always on the top of our minds. Currently, the airport is carrying out a 900 million euro development programme in order to prepare for serving 30 million passengers.

“We want to move people as smoothly as possible. We do our best to ensure smooth travelling and high customer satisfaction – also in the future. We offer safe, reliable and a unique customer experience. I welcome everyone to feel the positive atmosphere of Helsinki Airport”, Haapasaari concludes.

The 2018 World Airport Awards are based on 13.73 million airport survey questionnaires that were completed by over 100 nationalities of airport customers during the survey period. The survey operated from August 2017 to February 2018, covering more than 500 airports and evaluating traveller experiences across different airport service and product key performance indicators - from check-in, arrivals, transfers, shopping, security and immigration through to departure at the gate. 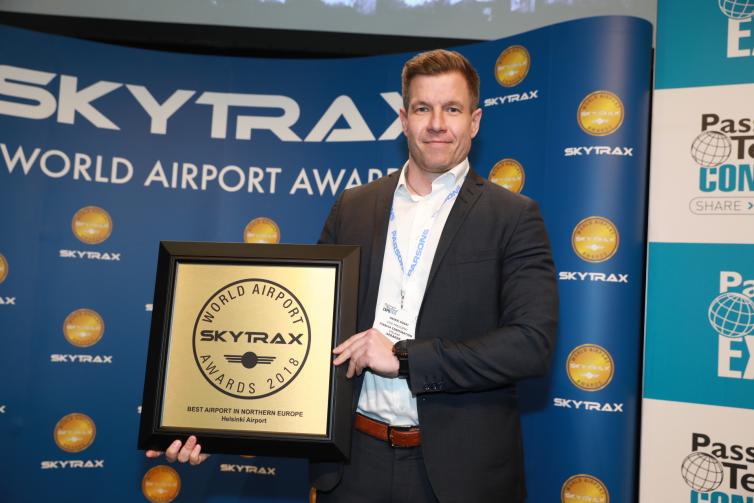 The award was handed out in Passenger Terminal EXPO in Stockholm, Sweden on 21 March 2018 to Finavia's Chief Digital Officer Heikki Koski.

We celebrate the award with our passengers

On Thursday, 22 March 2018, at 12-17, we will have an award celebration at Helsinki Airport departure gate 29. Passengers will have a chance to be photographed by a photo wall. One picture will end up to our guestbook, one picture will travel with a passenger. In addition, we will offer some smoothies with wishes for a pleasant journey: For smooth travelling!

Helsinki Airport is the best connected airport in Northern Europe with 145 non-stop destinations all around the world by over 50 airlines. It is an important air traffic hub between Europe and Asia. To Asia, the number of direct routes totals 20 and the number of departures per week over 100. In 2017, Helsinki Airport served 18.9 million passengers, which was 9.9% more than the year before. In 2018, the airport expects to reach the 20 million passengers milestone.

The SKYTRAX World Airport Awards are the most prestigious accolades for the airport industry, voted by customers in the largest, annual global airport customer satisfaction survey which has operated every year since 1999. The Awards are widely regarded as the quality benchmark of airport excellence for the world airport industry, assessing customer service and facilities across 550 airports. The survey and awards are independent of any airport control or input and represent an impartial benchmark of airport excellence and quality. The World Airport Awards are widely known as the Passengers Choice Awards. www.worldairportawards.com