Forget snakes – what about pandas or horses on a plane? Here's how air transport for large animals works

Article published
2.10.2018 at 09:00
Whether it’s zoo animals, racehorses or exotic species, creatures of all shapes and sizes deserve to be safe and comfortable when they are transported by air.

Air cargo is an efficient method to transport live animals over long distances. Of course, a considerable amount of preparation goes into animal handling to ensure the safety and welfare of the special cargo.

According to Tuomas Kansikas, Director, Air Freight, at DHL Global Forwarding (Finland), large animal transport is niche segment in which the company has vast experience.

Including the pandas, Deutsche Post DHL has provided the smooth and safe delivery of 21 endangered species such as tigers, rhinos and gorillas in the past two years. Kansikas notes that often, these animals are headed to zoos worldwide. Transporting racehorses is also very common.

Close cooperation with vets and zoos

“Every animal is an individual case. The most important thing is that we need to cooperate with the veterinarians as they are the experts and know the condition of the animal and what kind of environment is needed during transport,” says Kansikas. “We honour what these veterinarians say and work accordingly.”

Many of these projects involve a dedicated charter flight. As the animal’s health and welfare are the starting point, the containers that are used during the transfer are fully compliant with IATA’s Live Animals Regulations (LAR), which is the worldwide standard for transporting live animals.

“That’s the most important thing we ensure: that the animal has a good stable environment during transportation. For us to achieve this, our teams need to work closely with zoos and all our partners,” he continues.

Apart from taking care of the flight arrangements, groups such as DHL may also organise the land transport component of an animal relocation. Kansikas looks back on the teamwork that made the pandas’ move to Ähtäri Zoo as smooth as possible. 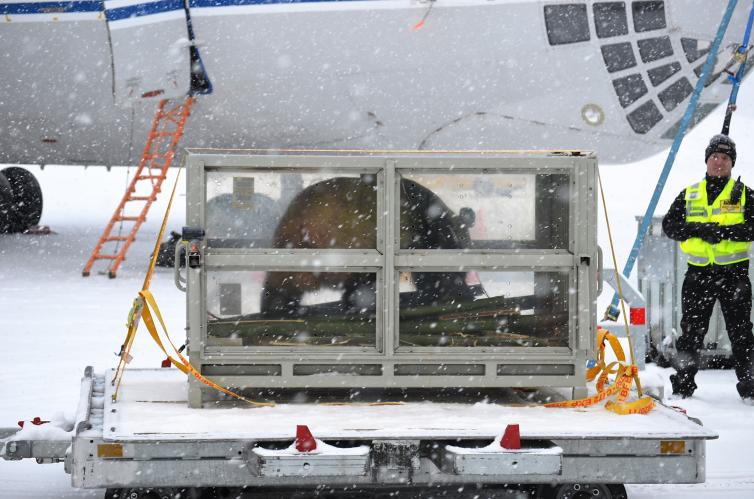 Veterinarians followed the truck carrying the pandas while police led the way. A spare truck and a vehicle to monitor the temperature of the truck were part of the convoy.

“We saw that being in charge of both the air and land transport was most beneficial to the animals. Many times, when the chain is handled by one group, the job becomes clearer,” says Kansikas.

Other services like insurance are offered to suit customer wishes. Quarantine is arranged to follow individual country regulations; many times, it is organised by the customer.

“This type of project is very interesting for us and we are keen to offer our expertise. Whatever role we play when moving heavy animals either by air or by road, we always oversee is that the animal is safe and in a healthy condition,” says Kansikas.

Read about how airlines carry pets and guide dogs

SVP Katja Siberg leaves to take up position at another company

People of Finavia: Airport maintenance is all about teamwork