Article published
15.9.2022 at 12:57
Norwegian’s 20-year anniversary and a significant milestone in passenger numbers were celebrated at Helsinki Airport on Thursday 15 September 2022. Over the past 12 years, Norwegian has served 20 million passengers in Finland.

Norwegian started operating in Finland 12 years ago by launching flights from Helsinki to Stockholm and Oslo. Over the years, Norwegian has expanded its route network from both Helsinki Airport and Finavia’s network airports. From Helsinki Airport, Norwegian currently offers direct flights to 20 destinations.

The anniversary was celebrated at the departure gate of a Helsinki–Oslo flight, where Norwegian presented a gift card to its 20 millionth passenger.

“It is great to be part of celebrating Norwegian’s history in Finland! Norwegian has been flying from Helsinki Airport for 12 years, and I am particularly happy about our good cooperation,” says Ulla Lettijeff, Senior Vice President, Helsinki Airport Director at Finavia.

“The Finnish market is a key part of Norwegian’s Nordic strategy. This year, we have reopened our base at Helsinki Airport and hired about 150 colleagues in Finland. Our goal is to continue being a strong operator in Finland and to offer direct flights to popular city and beach destinations around Europe to passengers departing from Finland,” says Geir Karlsen, the CEO of Norwegian. 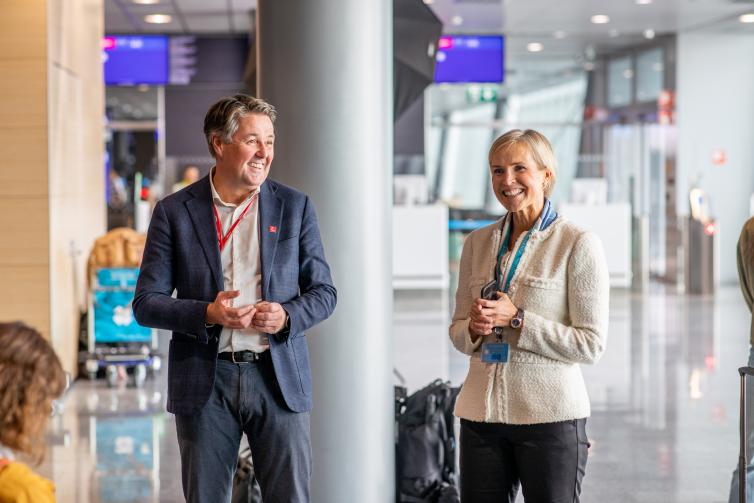 Coffee and cupcakes were served to passengers as part of the festivities at the departure gate.

Main image: The lucky 20 millionth passenger, Maria Eilola (in the middle), was rewarded with Norwegian's flight to a chosen destination for four people. On the left Ulla Lettijeff, Helsinki Airport Director at Finavia, and on the right Geir Karlsen, CEO of Norwegian.